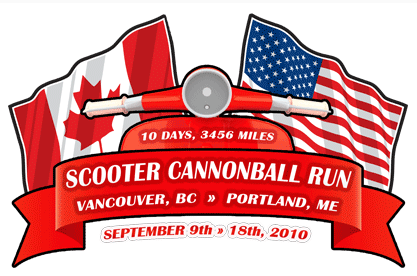 Welcome to the end of day one of Cannonball. Wow what a crazy day it has been also what a long strange trip it has been to get to this point!!!. Any things that can go wrong…will go wrong.
I have had my gremlins from non-working cameras to electrical problems on the scoot to a top case filled with gas! Yea is was soo bad it smelled up Jess’s room…man was he pissed ☹
At the moment we have three riders on the west side of Yosemite that at staying the night and will catch up inn the morning.
The journe began with a great reception at Ocean Beach. Many of the scooter girld were present along with others fron SF. We rode to Alice’s restaurant off highway 35, had some grub then participants left on their own accord. This is when my favorite camers decided to take a shit and the power to the GPS was non-existent.
So luckily I know how to get to Mount Hamilton and I read the paper directions. I got as far as highway 5 and was feeling the effects of a few hours of sleep from the past few days trying to get the scooter Cannonball ready. I was soo tiered!!! Just 40 winks…
At Patterson I got some gas, several energy drinks and decided to call my buddy VCLG Ritch because I knew he had had some issues with the Franken-scoot. Well I figured if he answered the phone then that would not be a good sign.

Not good. He was across the road getting some food and trying to figure out what was wrong with his scoot. Oil leaks, unstable performance at high speeds and loss of confidence because if the gremlins that attacked him. Well he put his mindset and scoot in cruise control and focused on getting to the end so he could diagnose and work on it at end at Li Vineing

When we finally reach the end I had soo many crazy experiences with my scoot, crazy swiss people who locked their keys in their 70’s disco van, to robot loosing his spare tires and rain gear, to riding in natures finest scenery that I could seriously write a novel about today’s ride!

So the internet REALLY sucks here and I am sooooooooo tired. Stay tuned till the next episode of SCOOTER CANNONBALL 2008!
Posted by Pistol Pete at 11:41 PM

Pete- fatique is not your friend, get some rest! Hope the second day goes better and you get the kinks ironed out.

Pete, I followed you down from Alice's. After 85 I found a struggling Lammy on 280. It was just GPS issues. Hope you all are ok.

Keep on going. How's Rich's Skipper doing? Saw that he had problems with the variator on Jess's blog.

Pistol Pete
Nor Cal, California, United States
Why Pistol Pete? Cause I am quick to SHOOT a photo while riding precariously yet in control on my STEED. I have been riding motorbikes for over a quarter of a century and have an incredible passion for scooters, travel, people and life. I try to capture a worms eye and birds eye view of the moto rider in order to give the viewer a unique perspective of my impetuous passion. I have been a regular article and photo contributor to SCOOT! Magazine as well as various moto publications. I am here to document this Grand Tourismo, so sit down hold on and enjoy the ride! Oh and here is the link to where the photos will be posted http://www.flickr.com/photos/scooterpics/collections/